Man, how about this weather we’ve been having? Isn’t that something?

I have long had a mild awe of the weather, especially when rain and snow caused the rivers in my hometown to flood with more than a little regularity. One New Year’s Eve I helped a friend move cars from his dad’s dealership to higher ground, then went back to help get the restaurant I worked at ready for the impending flood as well.

I used to be terrified of thunderstorms when I was younger. Just absolutely hated them. Then one summer, we were staying at our cabin at Seneca Lake. My brother and I were sleeping in the screened-in patio as we sometimes did, and a storm rolled in. This one had all the bells and whistles: wind, rain, and LOTS of lightning. But for some reason, while it woke me up, it didn’t scare me like other storms had, and I lay there for the duration, in a sleepy appreciation of the show. Since then, I’ve enjoyed watching storms roll through, and have tried my hand at shooting weather photos once or twice. 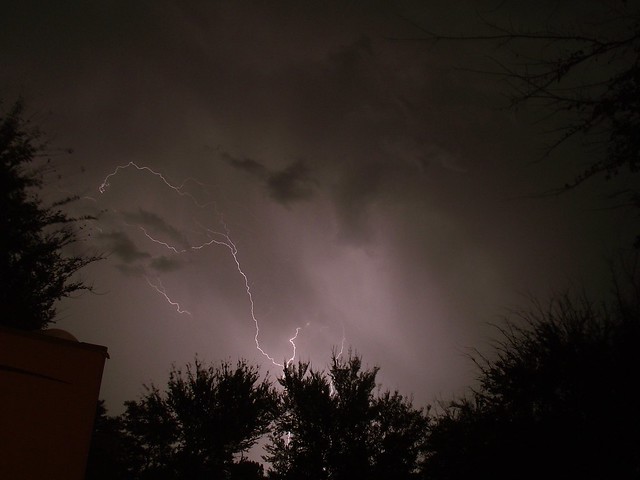 Several of the kids have been scared of storms off and on. One of the boys was so frightened of lightning that we couldn’t use the word at all around him. One early summer night, we were driving past a field filled with lightning bugs, and Diana or I pointed them out to the kids. This particular boy went nuts, just totally terrified of the lightning that he thought we were talking about. For years after, we had to call them “glowbugs.” We don’t have to these days, but still do sometimes. Just for old times’ sake.

Abigail was also terrified of lightning at a young age, and still isn’t really fond of it at eleven. During one storm in Ohio, Owen (who’d gone through his own stage of storm fear and conquered it by learning a lot about the weather) tried to comfort her. He brought her blankie over and hugged her after one particularly loud peal of thunder shook the house. Then he tried to share his knowledge in an effort to calm her down. “Don’t worry. The thunder can’t hurt you. It’s the lightning that will catch the house on fire.”

Yes, we still remind both of them about that.

Acurite 5-in-1 Weather Station at Amazon

Off and on over the years, I’ve thought it would be cool to have a weather station that told me what was going on outside. Last year, I had an Acurite weather station on my Christmas list, and Santa brought me this gadget.

Why did I choose the Acurite? I got lazy.

I had it in my head that I wanted to share my weather data on WeatherUnderground, so my only criteria when I searched on Amazon was a weather station that can stream data online. Acurite came up first in the searches, and I didn’t do any more research into how they stream data.

Any streaming of weather data requires a constant connection between the remote station and the internet. There are two ways to do this. One is to connect the indoor station (which is connected wirelessly to the remote station) to a computer with a constant connection. Acurite uses a “bridge” which you can find here at Amazon for about $80. You can also buy the entire set (remote station, indoor station, and bridge for about $170, as opposed to the $115 or so for the basic set. Unfortunately, Acurite doesn’t make it easy for users to find workarounds.

There are other weather station brands that will stream their data though. This guide from LifeWire lists seven (with affiliate links to Amazon). Here’s another guide from 2015 at Wired. If I had to do it over again, I’d choose something other than the Acurite mainly for price and included capabilities. I’d probably go with the Ambient Weather WS-2902 these days.

I never got around to actually installing the outside unit at the old house. It sat on the front porch to give us an outside temperature and wind speed reading, but that’s as much as we got from it. Once we settled in at Wayfarer’s Refuge, I wanted to get it mounted as soon as I could.

I’d done some looking at One Particular Harbor, trying to figure out how to get the thing mounted. We had an old satellite dish that I thought would make a solid base, but the only ideas I had at the time involved trying to find an adapter for the outside station to mount to the pole. That meant locating something that went from about an inch and three-quarters down to three-quarters of an inch. None of the local plumbing supply houses could help.

When I got serious about mounting it here, I started Googling different terms and finally discovered something called a mast stand-off kit, but I couldn’t find it for anything less than about $30, which was more than I wanted to spend, just on principle. I finally found this set of clamps at Amazon for less than ten bucks, and they were Prime eligible! I used those to clamp a piece of ¾ EMT conduit to an old satellite mount here and screwed the weather station to the top of the conduit.

The pole also holds our TV antenna, since we didn’t want to pay $85 for cable. We get about forty unique channels over-the-air, and we’re adding a streaming service Real Soon™, just as soon as we decide between TikiLive and Sling TV. Sling has a broader sports offering than TikiLive, but the latter is service is cheaper and is already installed on our new TV. Sling requires an extra device, like a Roku, although they’re currently offering a free Roku to new accounts. We’ll see which we end up with. Friends have SlingTV and love it. If you have experience with TikiLive, please speak up in the comments.

My Acurite 5-in-1 Weather Station at Wayfarer’s Refuge. One of our sweetgum trees in the background.

We’re continuing the move, slowly. Every week, we go back to One Particular Harbor, pack up a bunch of things in boxes, and bring the boxes back to Wayfarer’s Refuge. Things are filling up and filling out nicely. We’ve finally been able to get all of our books on shelves so that we can see them all. At the old place, we shelved some of them two-deep because of space limitations.

I remarked to Owen the other day that while this house is technically smaller than the old one by 300 square feet, it seems to flow better, and he agreed. Our living room is about two-thirds the size it used of the old one, but we’ve got more usable shelving.

I shared on Instagram a screenshot of some of my production numbers this year. It wasn’t pretty, and I’m not talking about the photo.

Those are atrocious numbers for someone who claims to be a #writer. What’s really sad is that that more fiction days than I had last year. I need to get my ass in gear. #BICHOK #amwriting #shutupandwrite

I’m nowhere near the goals I set at the beginning of the year. I’ll probably at least match my total word count from last year, but there’s no realistic way to beat it. I’d have to do something like 15,000 words per week for the next eleven weeks, and that’s just not doable. Yet. That would be two complete novels and then some. I want to get to the 7,500-8,000 words-per-week range, but that’s going to take time and effort.

At this point, I think Discoveries is going to come out early in 2018. I’m working on the second draft of that now (just finished 17 of 27 chapters), and then it’s off to the editor and time to call my cover artist. But with just ten weeks left in the year, I don’t think all that can happen in an emotionally healthy amount of time. So look for Discoveries in the spring.

In Plain Sight, the working title for Book 3 of The Sad Girl series, is cruising along at about 15,000 words right now. My daughters have dance and gymnastic classes on Tuesday nights, and that gives me a couple of hours to bang out a few hundred words, so that’s what I’m doing there. Once the second draft of Discoveries goes to the editor, I’ll be putting a lot more time in on In Plain Sight. I think it’s going to be a lot longer than either of the first two books. The Sad Girl was around 87k. Discoveries is shaping up to hit about 75k. I think I’ll end up in the low 90s for In Plain Sight. There’s a lot going on there. But it’ll be fun. Look for In Plain Sight to hit around fall, I think.

Don’t forget to sign up for my newsletter. It’s infrequent and irregular, and I won’t share your email.

If you enjoyed this post, please share it with your social media feeds via the links below.