Facebook’s On This Day app did it again yesterday, reminding me of a momentous time five years ago.

At that point, I had been out of work for almost a year and a half. Money was getting tight, and losing the house was a serious possibility.

We had occasionally kicked around the idea of living in an RV fulltime, as several of our friends were doing at the time, but we hadn’t really felt the nudge or the leading to actually take that step. 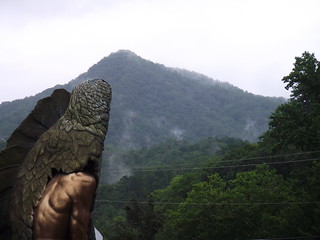 We had an opportunity to go on a week-long Work & Witness trip to Cherokee, North Carolina, and found we’d be staying in a cabin at  Jellystone Campground. Their cabins are actually built like park model RVs, although they’re two stories tall. But the square footage was a huge drop from the 2,800 we were living in at the time.

As the trip grew closer, and our financial situation continued its downward creep with no relief in sight, we decided to make the trip our fleece-casting for our fulltiming decision. If we could live together in cramped quarters for a week, and make things work out, then we could probably make things work in an RV.

In Judges 6, when Gideon lays out his fleece, he does it twice to make sure he’s doing the right thing. And it was a momentous decision he was making. It made sense to make sure he was in God’s will.

On our way down to Cherokee, I got a phone call from a friend who knew I was out of work. He had overheard a customer saying they were looking for a service writer at a lawn equipment dealership. It wasn’t something I had ever done, but it was something I could do. As soon as we arrived in Cherokee, I emailed my resume and a cover letter to the dealership.

Within ten days of our return from our trip, I had interviewed with the dealership—and was turned down. No particular reason, the manager said. The owners had final say, and they chose a different guy.

We didn’t intend at the time to make that a second fleece, but it turned out to be one. The trip had gone well. The kids enjoyed it, and knew what our thinking was as far as our future housing arrangements, and liked the idea. The outcome of the job interview seemed to confirm our thoughts that it was time to leave Columbus.

Now here we are five years later and a thousand miles south. My wife is leading a church. I’m not working in the traditional sense, but I’ve published one book, written two others, and have started a fourth. I’ve been able to establish VA disability and education benefits. We’re a little better off than we were five years ago. It might not have been the exact path I would have laid out. But I’m happy with where we are.