Surprise! I wrote a book review!

The issues I’ve been having with my faith aren’t a secret. I’ve written about my struggles multiple times here, although not very deeply. That might be because I’ve been avoiding dealing with them very deeply.

At any rate, one of the things I’ve been doing is reading a lot more religious blogs. That seems to help me process my thoughts a little better when I’m willing to actually deal with them. I’m reading a little bit of everything, from Rachel Held Evans to Red Letter Christians, Samantha Fields, and even Godless In Dixie. I don’t know that it’s helped tremendously yet, but it at least feels like I’m doing something.

Imagine how happy I was to find that fellow former Gravity author Sarahbeth Caplin was more than occasionally writing on religious topics. She managed to touch a nerve more than once with her posts, and I quickly added her blog to my reader. 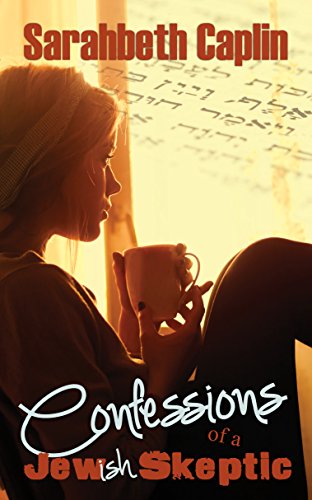 But she’s also quite a prolific author, with four novels, a book of poetry, and now two non-fiction books. The latest, Confessions of a Jew-ish Skeptic, continues the narrative of the journey she started in Confessions of a Prodigal Daughter.

This isn’t your normal book review, because the topic is so dear to me.

Caplin is ethnically Jewish, but converted to Christianity several years ago. She hit some major road bumps in her faith journey already. A fellow student called her a heretic in seminary after she questioned the traditional Christian interpretation of Isaiah 53. Her father died on the eve of Rosh Hashanah. She’s bounced between the Christian and Jewish identities and the Christian and Jewish cultures for years, and yet still finds herself picking her way across the emotional, cultural, and spiritual minefields generated by those two groups.

Caplin broke the book into two sections: Spiritual Identity and Cultural Identity. Each section has about twenty chapters but the chapters are fairly short – about the length of a good blog post. It’s an easy and fast read if you want it to be, but the chapters are subtly powerful, making you sit back after reading on to mull over the thoughts it brings up.

As a converted Jew, Caplin brings a poignant perspective to so much of the “Christian experience.” Life in Evangelical World, as she calls it. I think what I loved most is that she’s working on incorporating the Jewish tradition of asking questions with her new religion. At the same time, she speaks up for those who don’t feel they can ask questions.

I can so sympathize with feeling unable (or not allowed) to ask questions about the faith or religion. Questions seem to imply doubt, and doubt implies a lack of faith. Lack of faith is a bad thing for a Christian. Admitting to others that you have questions is rarely an easy thing to do. It’s even harder when your wife is a pastor.

Caplin spends several chapters talking about how certain common Christian sayings or phrase or beliefs can be troubling or even triggering for abuse survivors. She reminds us how critical it is to consider where a person might be coming from when use certain phrases. When we say something like, “I’m nothing without Him,” we may mean that Christ is everything to us. But someone who’s heard “You’re NOTHING without me!” from every male in her life isn’t going to be incredibly accepting of the same phrase from or about God right away.

Her closing paragraphs are still resonating for me.

I’m still a skeptic. A Jew-ish Christian with skeptic tendencies. Not that labels matter.

But if that’s what I am, I don’t think I’m a “true” skeptic, however that’s defined. I’ll always have questions, but maybe one day I’ll have questions with less doubt. “Skeptic” is not so much a self-identifier as it is a name for a phase—a dry spell, a season—that I’m in right now. It’s not a place I want to stay. I have a long-term goal of getting my faith back. You could say I’m a skeptic with an agenda.

That’s it. That’s me in eighty words. I’m in a dry season in my faith. What Caplin’s book says so eloquently is that it’s okay to be in a dry season. More importantly though, she tells me I’m not alone. Is there a more powerful message any author can convey?

What Caplin's book says so eloquently is that it's okay to be in a dry season. #faith Click To Tweet